March on the NRA
Written and edited by: Laur Baird

On August 4th, Fairfax, Virginia, I protested against the NRA. It was overall a very motivational and inspiring movement, aside from all of the sadness and heartbreak that took place as well.

I was there from around 11 in the morning, to around 3 in the afternoon. I met so many amazing people, including parents, students, teenagers, activists, and survivors. The energy was incredible and there was so much support going around, it was so amazing to see. People brought signs with different phrases or photos on them, and held them up during chants and while people spoke. I got interviewed by a news company that was there all day, and got asked questions about my opinion on gun reform, and why it is important to vote this November. Many different speakers went up and shared their experience with gun violence, or why they felt that change was needed as soon as possible. I took so many photos, and left with so much more motivation to continue fighting stronger, and harder than ever before.

It was very hot and humid, and definitely very exhausting, standing out in the heat all day, talking to people and watching people speak. I was lucky enough to meet a few activist friends there, and other students from the area. I also met some student activists from MSD. The students from the school sparked a revolution once their school had a shooting on Valentine’s Day, which killed 17 students and teachers. It shocked the community, and the entire world, enough to inspire change and fight for what we believe in. 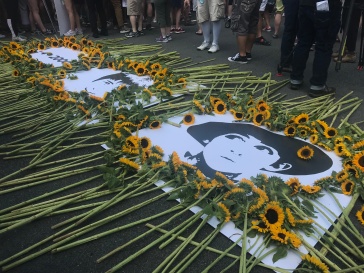 There were people of literally all ages there, and it was very inspiring to see everyone get together and talk about their beliefs and personal stories. It showed that there are always so many people who support you and what you believe in. There were some counter protesters that showed up to defend the NRA, and were armed with their firearms. There were not many, but some walked through the crowd of people and tried to spark up debates, while others yelled at us from across a barricade.
The day of the march was Joaquin Oliver, aka Guac’s 18th birthday. He should have been there to celebrate, but sadly he was killed during the school shooting back in Parkland, Florida.

Processed with VSCO with c1 preset 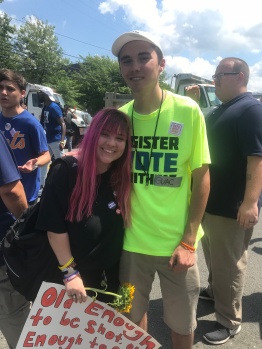 I met David Hogg, one of the largest student voices behind March for our Lives, started after the shooting that took place at his high school back in February. He advocates for common sense gun reform legislation, such as red flag laws and stricter universal background checks.

My sign says, “Old enough to be shot, old enough to fight against it.” I wrote this phrase (somewhat inspired by a quote I saw from Trevor Noah,) because I always hear people say that the youth should not have a place in politics. People tell me that I am too young to understand the truth, what is going on in the world, and that my opinion is invalid. My sign is basically a big “actually, you’re the incorrect one here,” to all of those people.